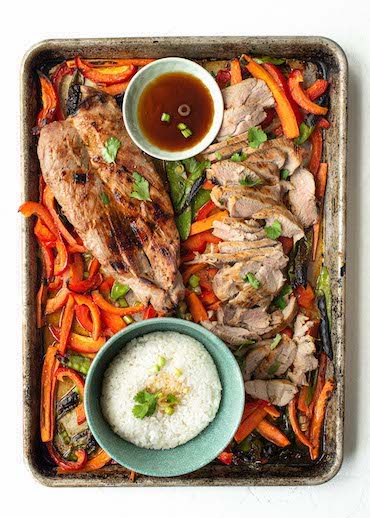 This recipe is a family favorite from Dr. Yum board member and food photographer, Laura Visioni

On a large rimmed baking sheet, toss the veggies with 1-2T vegetable oil (just enough to coat) and 2 tablespoons soy sauce; season with salt and pepper. Place the trimmed pork on top of the vegetables, and season with salt, pepper, and 1 tablespoon honey. Broil until pork and vegetables begin to char, 6 to 8 minutes. Toss vegetables, and turn pork; drizzle pork with 1 tablespoon honey and salt and pepper this side. (some of the snow peas may blacken a bit at this stage, tuck those under the meat at this step or discard) Continue to broil until an instant-read thermometer inserted in thickest part of pork registers 145 degrees and vegetables are charred in spots, 6 to 8 minutes more. Remove from broiler. Cover with aluminum foil, and let rest, 10 minutes. In a small bowl, make sauce by whisking together equal parts soy sauce and honey plus any add-ins you like. Thinly slice pork and serve with vegetables and sauce. Pairs well with rice.

More about carrots »
More about honey »
TRY OUR Meal-o-matic!
Printed from:
https://recipes.doctoryum.org/en/recipes/sheet-pan-pork-loin-with-veggies-96722