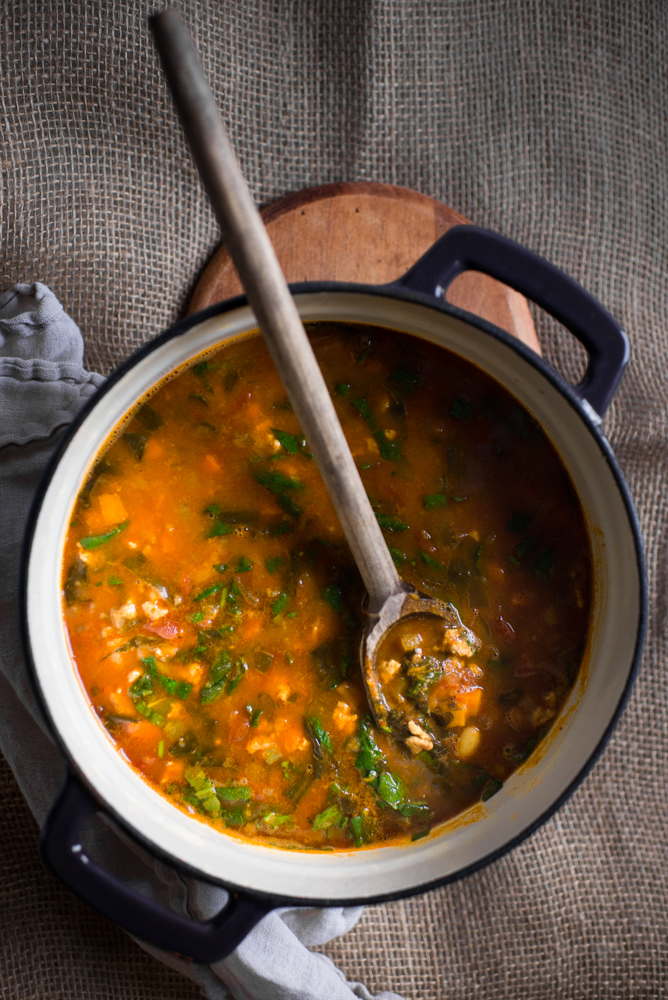 I love chili. It’s easy and fast, and for the most part it’s a meal in a pot. My only criticism is that there are no greens in it. I decided to use a bunch of different veggies with ground turkey and beans and create my own version of chili, but with a bit more color and variety. The greens may throw your Tiny Tasters off, but the chopped up baby spinach softens up well, gives a great color and adds a lot of nutrients. The broth is made with chicken stock and diced tomatoes, but most of the body of the broth comes from butternut squash. The chili flavors remain the same. I add tumeric for a little color but also for the healthy anti-inflammatory properties. A little flax gives some omega 3 fatty acids, too!

My tasters tasters don’t love mushrooms so I run these through my mini food processor so they are almost ground up and cook into the broth. By cooking the veggies first it adds some flavor and softens them up, making the simmering time a little faster, too. This meal can be put on the table from start to finish in 45 minutes, some of which will be just simmering. A side of cornbread, a little fresh fruit and you’ve got a healthy and very economical meal. The spices are written for a wide audience including smaller children. If you have older children or adults who like spicy food, you could add more chili powder and even a pinch of crushed red pepper or a dash of cayenne pepper. If your kids don’t like turkey you could easily substitute lean ground beef or ground chicken. For a vegetarian/vegan version grate 16 ounces (2 bricks) of tempeh over a box grater and use instead of ground meat.

This chili won the chili cook-off at my son's school one year. Recently one of our cooking students made it for his son's school chili cook off and it won first prize AGAIN! I guess you can say it's an "award winning recipe!"

Heat 1 tablespoon olive oil in a large soup pot, and cook onions until soft about 1-2 minutes, add carrots, then garlic and mushrooms and cook until veggies are softened. Add chicken broth and diced tomato with juices. Cut largest butternut squash pieces smaller, making it faster to cook through. Add butternut squash, spices, flax meal, and salt. Bring to a boil. Cover and simmer about 30 minutes. While chili is simmering, heat 1 tablespoon olive oil in skillet on medium. Cook turkey until almost brown and cooked though. Turn off heat and set aside. When butternut squash is softened use the back of a spoon in the chili to mash the cubes until broken apart. At this point squash should be dissolved and incorporated into the broth. Add turkey and simmer 5 minutes. Add beans and spinach and cook until beans heated through, about 3-5 minutes.

Chili can make a great babyfood option as the long cooking softens the ingredients. Smash or blend to the desired consistency. Consider spooning off baby's portion first before adding additional spiciness to suit the rest of the family.

More about garlic »
More about carrots »
More about baby spinach »
More about mushrooms »
TRY OUR Meal-o-matic!
Printed from:
https://recipes.doctoryum.org/en/recipes/colorful-turkey-chili-25329