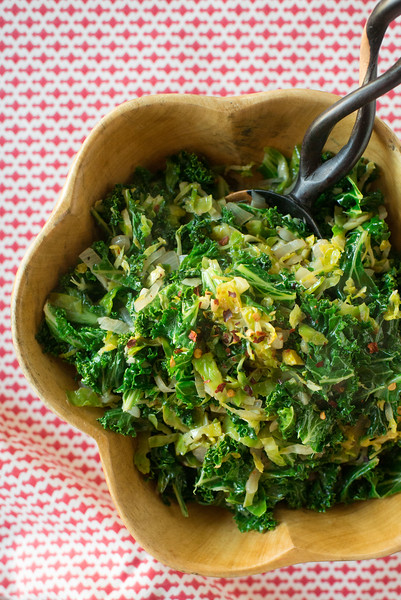 "Until I started working for the Dr. Yum Project, I had never really eaten kale. It was not something I grew up eating and I really only knew about it as a garnish for under catering platters --- what a waste of good kale! My first introduction was Dr. Yum's famous Dinosaur Kale Salad and I realized what I had been missing. I now love kale chips and find myself adding kale to soups and stir fries regularly. I was searching for a recipe where kale would be the star and decided to combine it with another favorite of mine: Brussels sprouts. I used a kale recipe from My Nourished Home as a starting place. I tried the recipe out on my family at Thanksgiving and I think we found a winner!" Wendy Cannon, a cooking instructor at the Dr. Yum Project Kitchen

Wash, dry, and rough chop (removing large stems) one bundle of kale. Peel and thinly slice 2 shallots. Peel and mince 4 cloves of garlic. Prepare shaved Brussels sprouts by trimming off and discarding the end, slice sprouts in half, then thinly slice each half into shavings similar to cabbage for coleslaw. Heat 2 tablespoons of coconut oil in a large fry pan or wok. Add shallot and garlic and saute until soft, without browning. Add Brussels sprouts, stirring continuously for about 10 minutes. Add kale and continue to stir mixture while kale wilts. Season with a teaspoon of sea salt, cracked black pepper to taste, and 1/2 teaspoon red pepper flakes. Pour 1 cup of vegetable stock over kale, stir, and cover for 5 minutes. Uncover, continue to saute until most of the liquid is evaporated. Serve warm.

More about Brussels sprouts »
More about garlic »
More about kale »
TRY OUR Meal-o-matic!
Printed from:
https://recipes.doctoryum.org/en/recipes/kale-and-brussels-sprouts-saute-90728